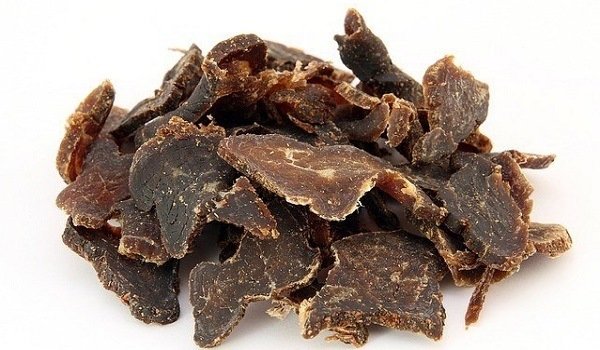 There’s no denying that most dogs are usually drawn to beef jerky due to the meaty scent and delicious taste. But should your dog really be eating beef jerky and is it safe for them to do so?

Well, in this guide, we’re going to address all of these questions and more, so let’s take a closer look.

Is Beef Jerky Safe For Dogs?

While lean beef is generally okay for dogs to eat, it’s safe to say that the average beef jerky treat is far more hazardous for your dog.

One of the primary reasons for this fact is due to the wide range of unhealthy ingredients that can be found in most commercial jerky, such as the very high levels of sodium, along with onion and garlic, which are both toxic to dogs.

Of course, there are also many different flavorings and spices that are commonly used in beef jerky, and many of these additives will be inappropriate for a dog’s nutritional needs. In fact, some of them can be quite upsetting to your dog’s digestive system.

Additionally, certain types of beef jerky can be very high in fat, which can also lead to further health issues for your dog, and even contribute to liver disease and similar problems.

It’s important to note the trouble that dogs have with salt. Even though beef jerky isn’t the healthiest treat for humans due to the high salt content, this aspect can be particularly troublesome and even dangerous for dogs. For some perspective, a human should generally have less than 1500 mg of salt a day, whereas a dog shouldn’t go over 10% of this amount! Just as you’d expect, it’s very easy to give your dog way too much salt if you’re feeding them jerky. 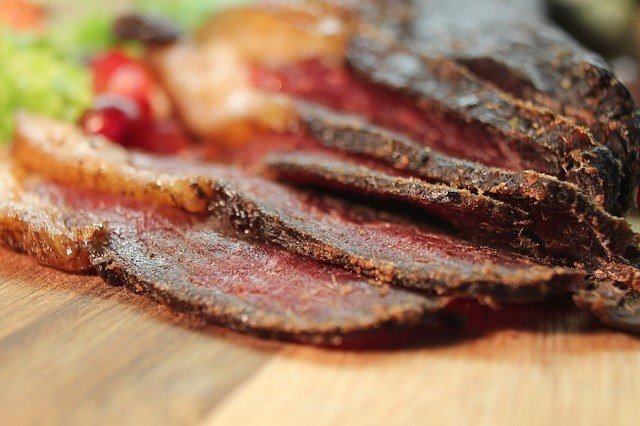 Furthermore, there have been various horror stories regarding jerky that’s often been sourced from China. For example, in 2007, thousands of dogs became very sick due to harmful ingredients finding their way into jerky products.

Worryingly, the exact cause for this problem wasn’t determined, despite many potential issues being investigated. Although it seems that melamine was found to be the culprit in many cases, which had been added to improve the apparent protein content, but is actually highly problematic for pets, causing kidney failure once ingested.

Ultimately, this means you should be extra vigilant about the ingredients that are used in any product that you’re giving to your dog.

Yet another potential problem is the high-calorie nature of beef jerky, which can contribute to weight gain and obesity for many dogs, and this can lead to further health complications later on down the road.

What Are The Risks Or Side Effects?

One of the most likely side effects of your dog eating jerky will be gastrointestinal issues. These effects could range anywhere from a mild stomach upset to something far more dangerous, depending on the amount they’ve eaten and what the ingredients were.

Further symptoms to look out for will include dehydration, vomiting, and diarrhea, elevated body temperature, and possibly seizures and death in the worst-case scenarios of salt intoxication. If you suspect your dog has eaten something they shouldn’t and their behavior is unusual, it’s important to contact a professional veterinarian or poison hotline, ideally with all the information you have available, such as ingredient labels.

Salt poisoning is a common potential threat posed from jerky, and this could manifest itself in a range of symptoms such as digestive upset, loss of coordination, excessive dehydration, and other strange behaviors that are unusual for your dog. Again, contacting a vet is very important in order to have the problem treated before kidney damage occurs. 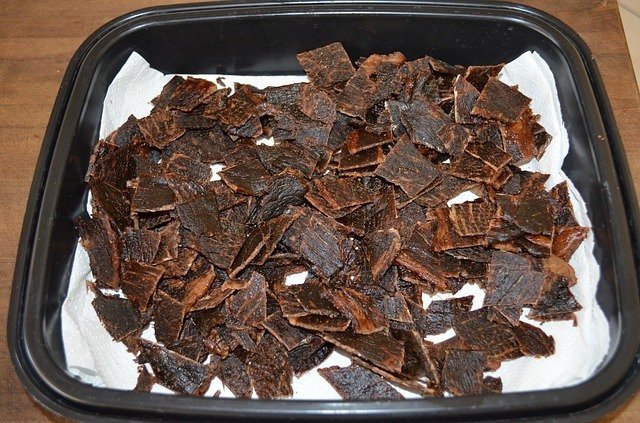 How To Make Homemade Jerky For Dogs

It’s possible to make your very own jerky for your dog, and it’ll certainly be much safer and healthier than letting your dog eat jerky that’s been created for humans.

Furthermore, you can use a range of different meats when making jerky for our dog, so your options could include beef, turkey, lamb, duck, tuna, salmon, and more. Ultimately, this gives you a great deal of flexibility and choice when making jerky, and you can always choose healthier meats that are lower in fat.

The easiest way to make healthier beef jerky for your dog is to use a few pounds of lean beef, cut it into reasonably sized strips, and either use a food dehydrator or cook it in the oven for several hours until it’s been fully dehydrated. You can then store these strips in an airtight container for a few weeks without any trouble, and use them as an occasional treat for your dog.

It goes without saying that you won’t want to add any spices to the homemade jerky if you want it to remain dog-friendly, nor should you add any salt, preservatives, flavorings, or seasonings that would make it unhealthy for your pooch.

In the vast majority of cases, it’s best to say no when to comes to giving your dog beef jerky. There are too many harmful ingredients to be found in these products, such as salt, onions, garlic, spices, additives, flavorings, and more.

While it is possible to make healthier alternatives with homemade jerky, it’s often wiser and easier to simply swap out the jerky treats for alternatives that are far more dog-friendly, to begin with.

In fact, there are many high-quality, tasty, and nutritious dog treats that you can give to your dog without much worry.

We are a participant in the Amazon Services LLC Associates Program, an affiliate advertising program designed to provide a means for us to earn fees by linking to Amazon.com

While we do our best to give accurate information this website is not intended to replace professional advice from a qualified veterinarian.

Back to Top
Close
We use cookies to ensure we give you the best experience on our website.OkPrivacy policy