If you’re wondering whether or not it’s safe to give your dog celery to eat, then you’ve come to the right place.

In this guide, we’re going to take a closer look at the various pros and cons of giving your dog celery, as well as learn more about the nutritional qualities it has to offer, and ultimately, whether it should be something your dog should be eating. With this in mind, let’s get started.

One of the best reasons to give your dog celery is due to the high amounts of vitamin K that are found in the plant. When combined with its relatively low caloric content, it becomes a useful snack for dogs who need to lose weight or maintain their current weight.

Furthermore, it can go some way towards keeping your dog’s breath fresher, and it may also have some teeth-cleaning abilities due to its inherent crunchiness and stringiness, which helps to clear away the plaque and break down any acids that may be eroding the teeth. Of course, celery alone can’t be an alternative to teeth brushing, but it can certainly help.

Certain ingredients found in the plant, such as calcium, potassium, and magnesium, along with phthalides, can help to lower blood pressure as well. Additionally, the phthalides may help to lower cholesterol, while vitamin C helps to support a healthy immune system.

There may also be some anti-inflammatory properties contained in celery, which can help to comfort a dog who has arthritis. 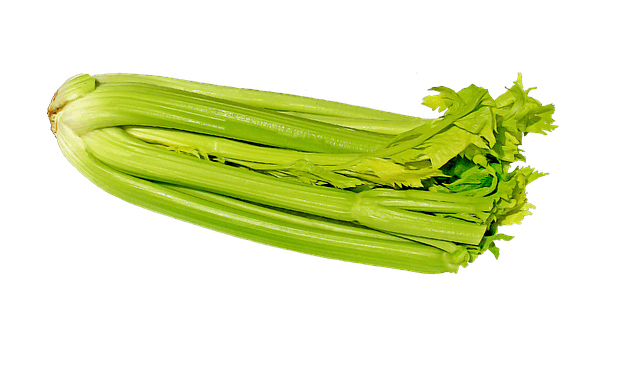 There’s a wide range of vitamins and minerals contained in the humble celery stick, and while it is extraordinarily low in calories, it does still have some interesting nutritional value to offer for dogs.

However, the most important aspect here is the high amount of vitamin K, and even though this can be obtained from other food sources, there’s no denying that it’s a great way to provide a range of useful vitamins and minerals without increasing the calories too heavily.

It’s worth noting that vitamin K is very important for dogs, as it helps to keep their bones strong, particularly as they grow into older age or if they tend to be highly active. Of course, there are a number of other sources for vitamin K, with other fruits and vegetables containing the vitamin in certain amounts, and some dog food brands may add this to their products, too.

How Much Celery Is Safe?

In general, it’s best to make sure you’re only giving celery to your dog a handful of times a week, so it shouldn’t make up a daily part of their diet too often. However, anywhere from 2 to 3 times a week should be perfectly acceptable for most dogs.

The key thing to bear in mind is that feeding your dog celery too frequently may lead to stomach upsets, so the best rule of thumb is to only feed it to them on an occasional basis. It’s also wise to talk to your vet before making any changes to your dog’s diet, particularly if your dog has any other health issues that require careful diet control. 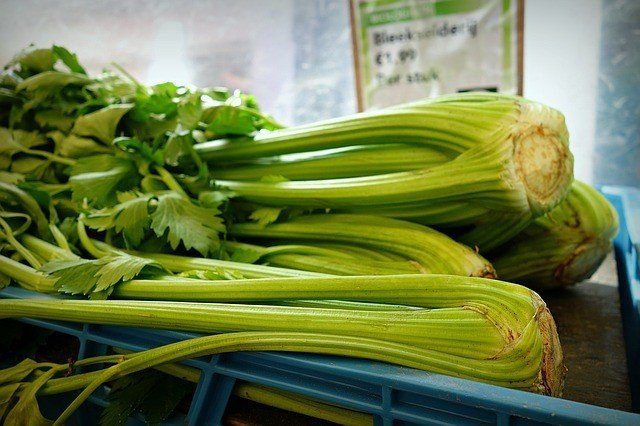 Serving Celery To Your Dog

Preparing celery for your dog is something you’ll need to be extra careful about because the stringy nature of celery can make it somewhat of a choking hazard for many dogs. You’ll also need to remove any leaves that are still attached to the plant, and only serve the same pieces that you’d eat for yourself.

Often, the best solution is to cut up the celery into very small pieces to reduce the risks of choking. Alternatively, you may prefer to blend the celery into a puree and serve it with your dog’s main meal. In most cases, this will be the easiest way to give your dog some added nutrition without posing any risks to their health.

If your dog is adamant about not eating celery, then one way to convince them is to simply chop it up into very small pieces and insert it into their regular food, regardless of whether you’re serving dry kibble, wet food, or a mixture of both. You can also smear other tasty treats along the celery to persuade your dog further. Peanut butter tends to work well, but there are numerous options to choose from.

As with any new food, it’s wise to introduce it slowly and gradually, so you can gauge your dog’s receptivity to it, as well as see whether it upsets their digestive system or whether they’re fine with it.

It’s safe to say that puppies have much stricter dietary guidelines to follow, so you may want to stick to feeding your puppy with their conventional dog food until they’re a little older. However, celery isn’t hazardous to a puppy, just as long as it’s served in a safe way that won’t cause any choking, and won’t interfere with your pup’s other nutritional needs.

Overall, it’s perfectly safe to give your dog celery, and it’s generally harmless and non-toxic if it’s served by itself. Furthermore, it does have a few health benefits to offer, not to mention being very low in calories, which makes it suitable for dogs who need to watch their weight carefully.

Of course, some dogs may immediately turn their nose up at celery, while others will find it a tasty, crunchy snack that they’ll love to eat. But with some experimentation, you can usually persuade most dogs to eat a little celery if you think it may be of benefit to them.