Are you wondering whether your dog can eat cucumber safely?

If so, we’re going to take a closer at the various things you’ll need to know when it comes to giving cucumbers to your dog, as well as the potential benefits and risks that are good to understand.

So, keeping this in mind, let’s get started.

First of all, it’s generally safe to give cucumber to your dog, as it’s a non-toxic vegetable that won’t cause your dog any immediate harm, and it can actually provide a number of benefits which we shall cover in this guide.

However, not every dog will be interested in eating cucumber. While dogs are omnivorous, there’s no guarantee that your dog will enjoy any specific fruit or vegetable. Fortunately, the water content of cucumber means many dogs will show some interest, particularly on a warm day!

The Benefits Of Cucumber

One of the top benefits of giving your dog cucumber is the high water content, making it a useful solution for keeping your dog hydrated, especially in warm weather.

In fact, cucumber has an impressive water content of around 96%, so it’s always useful to carry some with you when you’re walking with your dog in hot weather, along with a water bowl, of course.

If your dog doesn’t always drink enough as they should, but they’re happy to chomp down on some cucumber, then it can be a great way to get that all-important hydration for your dog.

Another use of cucumber can be as a snack for overweight dogs, rather than giving them their usual treats. The low caloric content of cucumber means it’ll have very little impact on any diet your dog may be following, and if your dog will accept the cucumber, it can function as a convenient, healthy treat. Furthermore, cucumber is also low in fat and sodium, which are great things to see in any snack.

Even if your dog won’t accept the cucumber by itself, it can still be used to bulk out your dog’s food and lower the overall calories within their daily meal.

Finally, cucumber may be able to freshen up your dog’s breath to some degree. Primarily, this benefit is due to the number of phytochemicals and phytonutrients which can help to reduce the number of bacteria that are prone to creating bad breath and odor. 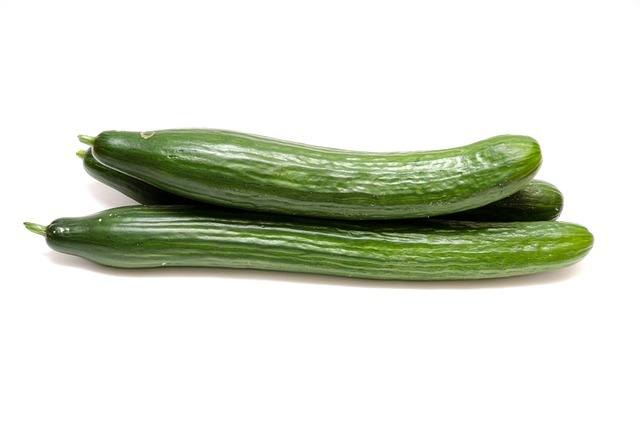 Are There Any Nutritional Benefits?

The cucumber is mostly comprised of water, but it does contain some useful vitamins and minerals that can be positive for your dog’s overall health. For example, cucumbers contain vitamin K, potassium, manganese, copper, vitamin C, vitamin B1, biotin, beta-carotene and more.

The manganese and beta-carotene may also be an aid in reducing inflammation, which is another potential benefit that could help your dog.

One of the main risks posed by cucumber is the possibility of choking, although this can be offset to some degree by chopping up the cucumber in a way that won’t lead to choking.

Small chunks are usually the best solution, but you’ll also have to pay attention to how quickly your dog eats it. Smaller dogs will also benefit from cutting the chunks smaller, just as you’d expect.

Additionally, overeating cucumber can be bad for your dog, as it’s likely to cause some degree of stomach upset. However, it’s unlikely to have any serious side effects as it’s generally non-toxic to dogs.

Should I Give My Dog A Whole Cucumber?

In most cases, it’s best to give your dog cucumber in smaller chunks to reduce the risk of choking. Furthermore, many dogs won’t show as much interest in a whole cucumber in the first place (although this can certainly vary from dog to dog).

Can My Dog Eat Cucumber Skin?

There’s nothing hazardous about the skin of a cucumber, so they’ll be no need to peel it before giving the cucumber to your dog. Of course, some dogs may be averse to the taste or texture of the skin, so they may spit it out. If so, it can be useful to take the skin off before you give it to them. 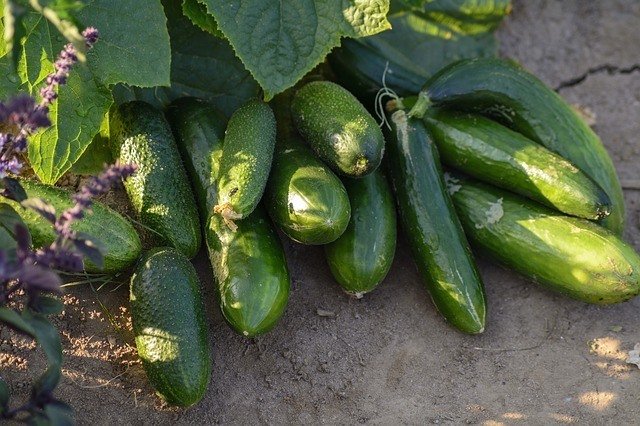 What If My Dog Eats Too Much Cucumber?

Even though cucumber is considered to be a safe treat for your dog, it’s still possible for them to eat too much. If you suspect this is the case, your dog may suffer from diarrhea, vomiting, and general stomach sensitivity. If your dog is having a rare allergic reaction, then it’s important to contact a vet as soon as possible.

However, these situations are highly unlikely from just a few small chunks of cucumber, but if your dog has managed to chomp down numerous cucumbers in a row, then you’ll want to keep a close eye on them to see how they’re coping with it.

A puppy should have no trouble with eating cucumber, and there’s a chance they may enjoy it, but you shouldn’t make it a key part of their diet because a puppy can have delicate nutritional requirements.

Therefore, it’s usually wise to prioritize their usual puppy food and only use cucumber as an occasional snack.

How To Serve Cucumber

The best way to serve cucumber to your dog is to chop it up into small chunks, which helps to make it easy to chew without posing a choking hazard.

It’s also best to avoid giving your dog any cucumber that has been exposed to spices or seasoning or dressing. It’s also important to make sure you’re serving an actual cucumber, rather than pickles.