If you’re curious to learn more about whether it’s okay for your dog to eat pineapple, then you’ve come to the right place.

In this guide, we’re going to take a closer look at the pros and cons of letting your dog eat various forms of pineapple, along with the potential benefits, and even a few easy ways to serve it up. So without any delay, let’s dig in and learn more about pineapple.

The Health Benefits Of Pineapple

It’s safe to say that pineapple contains a wide range of vitamins and minerals which are not only beneficial for humans but for dogs as well.

Specifically, there’s a great deal of vitamin C in pineapple, as well as vitamin B6, thiamin, niacin, and thiamin. The minerals come in the form of copper, iron, magnesium, potassium, manganese, zinc, and phosphorus.

What’s more, the high fiber content of pineapple makes it an excellent digestive aid, although this could be problematic if consumed in high doses. If your dog could benefit some added fiber in their diet, then pineapple may help to alleviate some digestive issues such as constipation.

Interestingly, there is a proteolytic enzyme found in pineapple called Bromelain, which helps your dog’s digestive system to process protein. Bromelain may also help a dog who has kidney issues or joint pain, too.

Ultimately, it’s clear to see that pineapple has plenty of nutritional value to offer, and this can help to keep your dog healthy, bolster their immune system, and keep their digestive system running smoothly. But equally, it’s important to note that many of these vitamins and minerals are also available from other dog-friendly diets and treats, so pineapple certainly isn’t a requirement for a dog to be healthy! 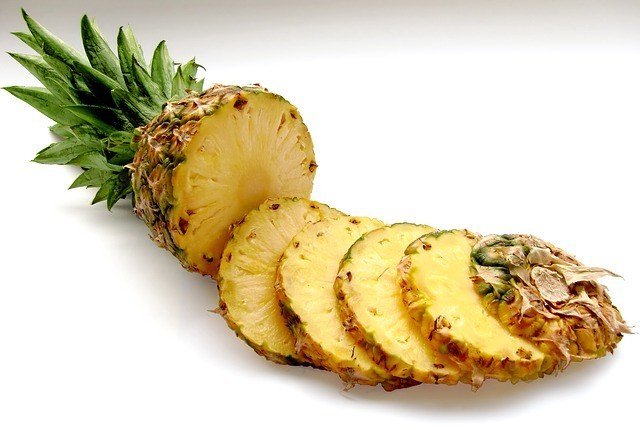 While pineapple may seem like a great snack for your dog so far, it’s not without its potential downsides. In particular, the high levels of natural fructose that are present in pineapple won’t be very healthy for your dog if they eat it too often. Eventually, high sugar intake could lead to obesity and diabetes, so moderation is key whenever you’re exposing your dog to sugary foods. Keep in mind that a dog’s digestive system isn’t built for dealing with vast quantities of sugar.

Additionally, eating pineapple in larger portions could pose a choking hazard, so the way you prepare it will also be important.

It’s smart t to keep the portion sizes relatively small, as too much pineapple could lead to stomach upsets and diarrhea. In general, it’s best to keep the pineapple to infrequent servings in order to minimize any downsides for your dog. Overall, it’s best to consider it as an occasional treat rather than a regular part of their diet.

You should also avoid giving pineapple to a diabetic dog due to the sugar content.

Overall, pineapple isn’t toxic or dangerous for your dog, even if it isn’t always the healthiest snack for them to eat. Fresh, raw pineapple is usually the safest option, although there are a number of other ways to serve it that can make it more appealing for your dog, such as serving it frozen in the summer.

Of course, it goes without saying that your dog can only eat the same parts of the pineapple as humans would, so this means you shouldn’t let your dog eat the spiky skin or the inner core of the fruit.

If your dog has a bad reaction to eating pineapple, such as vomiting or diarrhea, then it’s wise to not give them pineapple again in the future. Furthermore, any concern you have about your dog’s behavior after eating pineapple should be discussed with your vet.

There seems to be a surprisingly popular myth regarding whether pineapple can stop your dog from eating poop, but there seems to be little evidence for this phenomenon in reality.

Regardless of whether it’s believed that the pineapple makes the poop itself unappealing, or whether nutrition inside the pineapple fruit is supposed to alleviate the behavior, there’s no authoritative source that backs up the claims of pineapple discouraging poop-eating behavior.

However, some people may claim that it’s made a difference, and there are a few anecdotal reports from owners to be found in various online forums. Equally, there are many reports that state the tactic hasn’t worked for their dog. If you’re concerned about these behaviors, it’s worth mentioning it to your vet to get an expert opinion that also takes into account your dog’s medical history.

While a puppy will generally be safe to eat a small piece of pineapple occasionally, it’s important to realize that a puppy’s digestive system isn’t going to be as tough and hardy as an adult dog.

Additionally, a puppy will have precise dietary requirements in their early stages, so it’s best to feed them a puppy-friendly diet without too much experimentation.

In many cases, a puppy may be more likely to suffer from a stomach upset or diarrhea due to the sugar and fiber content found in pineapple. 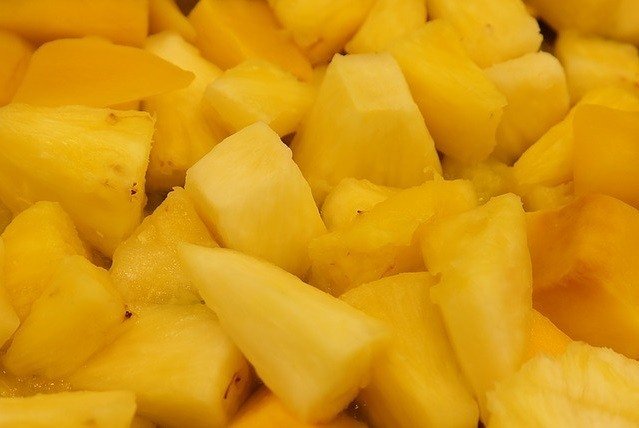 What About Canned Pineapple?

Certain pineapple-based products such as canned pineapple aren’t always as healthy for your dog, primarily due to the increased sugar that’s found in them, along with any other additives that may be found in the syrup.

In general, it’s best to avoid giving your dog canned pineapple. However, you may be able to wash the canned pineapple chunks in fresh water to remove much of the sugary syrup and make them healthier for your dog if it’s the only option available. But if possible, the fresh version of pineapple is always going to be a better choice.

Can My Dog Eat Frozen Pineapple?

A nice way to serve pineapple to your dog is in frozen form, particularly in the warmer summer months when your dog is likely to appreciate the cooling effects of the frozen fruit.

A few chunks or slices of frozen pineapple can be enjoyable for your dog to lick and chew on when they’re feeling warm, although you’ll obviously need to be wary of choking hazards.

Can My Dog Eat Pineapple-Flavored Products?

We humans can certainly enjoy pineapple in a variety of wonderful forms, such as tarts, pies, ice creams, candy, and more. But as you may have guessed, many of these treats aren’t very dog-friendly at all.

One of the biggest issues will be the extra ingredients that are found in these food products, such as all the extra sugar. In general, it’s best to stick to fresh pineapple for your dog, or simply give them an alternative tasty treat that’s designed with dogs in mind.

How To Serve Pineapple To Your Dog

If you’re serving raw pineapple chunks for your dog, it’s best to make sure the sizes are suitable in order to prevent any risk of choking.

You’ll also want to start out with very small portion sizes to see how your dog handles it. While some dogs may love pineapple, others may not be so keen. But regardless of whether your dog loves it or not, you don’t want to give them large portions or feed it to them too regularly.

Additionally, you need to make sure all of the skin has been removed from the pineapple, so your dog only consumes the fleshy part of the fruit.