If you’re looking for a detailed guide on whether dogs can safely eat pork or not, then you’ve come to the right page.

In this article, we’re going to take a closer look at a few of the main things you need to know when it comes to giving pork to your dog, so without delay, let’s get straight to it.

Can My Dog Eat Pork?

First of all, the quick answer is that pork is generally safe for your dog to eat in most cases. But while it’s not intrinsically bad for your dog, there are a few things that are worth understanding before you give them pork on a regular basis.

In general, the bad reputation that pork may have is somewhat undeserved these days, but like all things, it’s best served in moderation.

Pork is certainly tasty and appetizing meat that will gain the interest of any hungry dog, and it does have a few nutritional advantages in its favor, too.

To begin with, plain pork is comprised of just over 80% protein, with the remaining content comprising of fat. It also has good levels of vitamin C, phosphorus, iron, zinc, and vitamin B12.

One of the biggest risks of feeding your dog pork is the potential for trichinosis, which can happen if your dog eats pork raw.

The higher level of fat in pork can also be a problem for some dogs, and it can increase the likelihood of developing pancreatitis over time if your dog is consuming too much fat on a regular basis.

Finally, some dogs tend to have allergic reactions to pork, which can be more common than you’d think. Signs of a bad reaction will usually involve loose stools and stomach upsets.

Can My Dog Eat Ham Or Bacon?

Ham and bacon aren’t very healthy for your dog. While you may be able to get away with very small servings on an infrequent basis, it’s unwise to make a habit of it.

Both bacon and ham are processed meats that tend to be too high in salt and fat, which can ultimately contribute to pancreatitis and stomach upset in your dog. Furthermore, these processed meats seem to be more prone to cause allergic reactions as well. 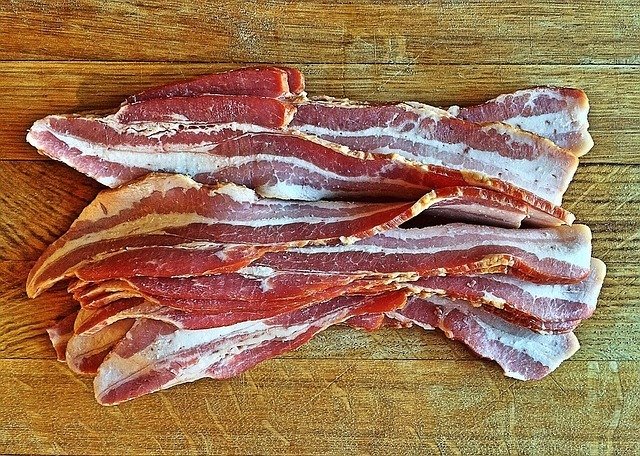 Can My Dog Eat Pork Sausages?

If the sausage is made only from pork then you won’t have too much to worry about, but many sausages come with added ingredients that can be harmful to your dog. Of course, garlic and onion powder will be out of the question, as these can be toxic to any dog.

When in doubt as to the sausage’s ingredients, it’s best to avoid giving them to your pooch, even though they may protest a little at being left out if everyone else is eating them!

The biggest problem with sausages will be the high level of extra seasonings and spices they usually contain, and they’ll often have higher levels of fat as well. Furthermore, the salt content of even plain pork sausages is often higher than you’d want to see. However, the occasional piece of plain pork sausage shouldn’t cause too much harm just as long as there are no toxic ingredients in there.

Can My Dog Eat Pork Bones?

Giving pork bones to your dog isn’t a good idea. These bones tend to be quite dry and brittle, which greatly increases their chances of splintering when chewed and this can cause a choking hazard to your dog.

Can My Dog Eat Raw Pork?

Raw pork poses the threat of trichinosis, which is usually transferred by the consumption of raw pork. While not all possible symptoms need to be present for a formal diagnosis, it’s likely that trichinosis will cause vomiting, stomach upset, fever, inflammation, lethargy and more.

Overall, it’s best to avoid giving raw pork to your dog. However, cooked pork will generally be much safer as it will kill off any parasites.

In most cases, pork that’s been prepared for humans to enjoy will come loaded with spices, seasonings, salt, sauces, or other ingredients that won’t be safe or suitable for your dog. Therefore, it’s generally best to not give your dog pork-based table scraps unless you know the precise ingredients in the pork.

You’ll especially need to watch out for onions, onion powder, garlic powder, and other condiments that could be toxic to your dog. 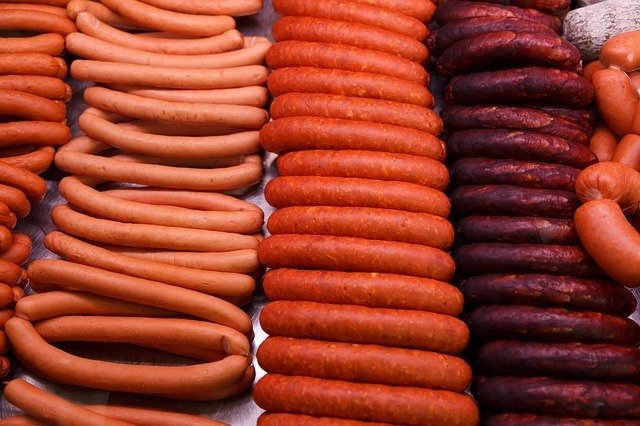 Can My Dog Eat Pork Fat?

Letting your dog consume the occasional, small amount of pork fat shouldn’t be too problematic, but you certainly don’t want to make a habit of it due to the increased risks of pancreatitis.

Most puppies should be able to cope with pork just as well as any other meat, although it’s important to make sure you’re giving your puppy the necessary specialized nutrition they need to grow into a strong and healthy adult dog. As such, you don’t want to go too heavy on the pork overall, especially if it’s fatty.

How To Serve Pork

When giving pork to your dog, it’s best to start out with a very small portion to see how they handle it. Many dogs can have allergic reactions to pork, which will usually be seen in the form of stomach upsets and loose stools.

If your dog copes with the pork without any trouble, then you should be fine to feed them plain pork more frequently.