It’s safe to say that many dogs go absolutely crazy for squeaky toys, and while not every dog will have the same level of enthusiasm for them, there’s no denying that they generate a great deal of curiosity and interest from the majority of dogs.

But what exactly is it about squeaky toys that make them just so exciting?

In this guide, we’re going to take a closer look at a few of the main theories behind a dog’s interest in all things squeaky, so let’s get straight to it.

One of the most popular theories behind a dog’s interest in squeaky toys comes from the fact that dogs have a natural instinct known as prey drive, which is the term used to describe a dog’s natural desire to locate, pursue, and capture their prey. These natural behaviors are instinctually rewarding to your dog, and it goes a long way towards explaining many other common behaviors that a dog will display, too.

A squeaky toy makes noises that sound similar to that of an injured or frightened prey animal, which immediately alerts your dog and prompts them to investigate, which can lead to further predator-like behaviors such as pouncing, chasing, stalking and more.

Additionally, this theory can further explain why a dog may lose some interest in the toy once the squeaker is removed because this simulates that the prey animal has been killed and is no longer making any noise.

Another interesting aspect of this theory is how different dog breeds may show varying interest levels with different types of squeaker toys. For example, small terrier-like breeds, which were often used for hunting rats and mice, tend to be very interested in squeaker toys that make high-pitched noises and look similar to small rodents.

On the other hand, retriever dogs may prefer larger squeaker toys that resemble ducks and birds, especially if they make quacking sounds rather than high-pitched ones. Finally, this concept may explain why some dogs have far less interest in squeaky toys, particularly if they’re from a breed that wasn’t traditionally used for any sort of hunting or retrieval purposes. 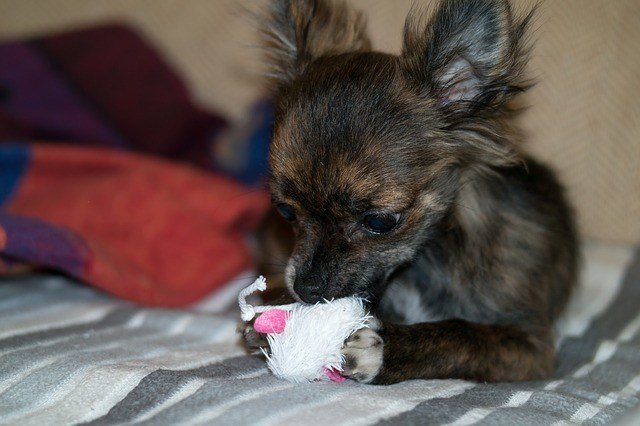 The immediate satisfaction theory focuses on the simple pleasure that your dog experiences when they play with a squeaky toy, with the idea being that the squeak is rewarding enough all by itself to fuel their intrigue and excitement.

In fact, your dog merely needs to bite or chew on the squeaky toy to be rewarded with a pleasurable response, and this gives them enough of a reward to encourage the behavior to continue.

The novelty factor can also play a role here as well, because many dogs will quickly become enthralled by their newest squeaky toy even if they have others to play with, and especially if the squeaking sound is a little different or unusual for them.

Furthermore, the simple act of chewing is always fun and rewarding for your dog, and a squeaky toy can often be a very nice thing to chew on, with the audible feedback offering an extra bonus for your dog to enjoy.

Yet another potential reason behind a dog’s fascination with squeaky toys is the association between hearing the squeaker and playing with humans.

Just imagine how many owners gain their dog’s attention for playtime by giving their dog’s favorite squeaky toy a few quick squeezes, and you’ll quickly see why this theory may have some merit.

Of course, every young puppy loves some exciting playtime with their owner, and it’ll take no time at all for them to imagine the fun and games they’re about to have whenever they hear you squeaking their favorite toys. 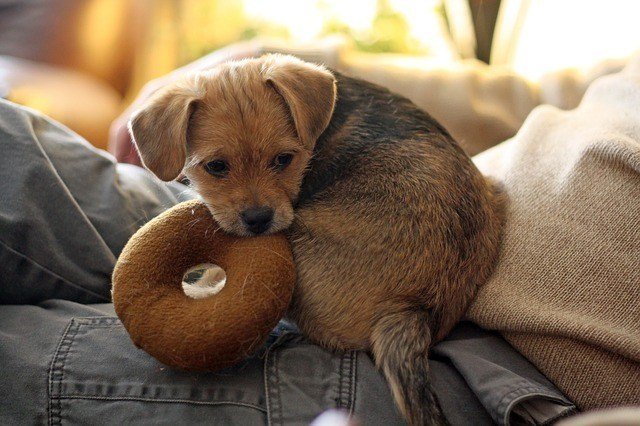 A Combination Of Reasons

Now that we’ve explored some of the most popular theories behind why a dog likes squeaky toys, it doesn’t take too much imagination to suppose a combination of reasons are triggering your dog’s intrigue and excitement.

So whether it’s your dog’s prey drive, their immediate satisfaction, a conditioned response, or a mixture of all three, it’s safe to say that squeaky toys are a very enjoyable part of your dog’s playtime routine – and they can often be more of the most exciting toys for them to play with.

Are Squeaky Toys Good For Dogs?

Something you’ll need to pay close attention to when you’re giving your dog squeaky toys will be their safety. In fact, squeaky toys can be particularly risky for some dogs, especially if they’re a strong chewer who can rip the squeaker device out of the toy in no time at all.

In general, it’s wise to keep a close eye on your dog whenever you give them a squeaky toy, and if it becomes ripped or damaged, then it’ll be time to replace it before the squeaker comes out entirely and poses a choking hazard to your dog.

Additionally, some dogs can become rather obsessive about their squeaky toys, and this could cause further problems for a small minority of dogs. While most dogs will be fine with squeaky toys, it may be better to find a suitable alternative if you have an obsessive dog who may be prone to overstimulation from these toys.

If you’re looking for some new and exciting squeaky toys for your dog to enjoy, then here are a few excellent options to choose from.