If you’re dealing with a nervous or highly anxious dog, then there’s a range of behavioral problems and difficulties this can cause for both you and your pooch.

However, with some careful training techniques and insight into the situation, it’s often possible to build up your dog’s confidence and reduce some of the anxious triggers that have such an impact on them.

While you can try to address the specific problem behavior directly (such as submissive urination), you may have better results by handling the general nervousness or anxiety first, so we will approach the topic from several key angles.

Ultimately, the goal is to help your dog overcome these feelings, find confidence, and get over any of specific problems this nervousness may be causing. So let’s get started.

Firstly, dogs will often become nervous when they haven’t had enough contact with other dogs or people when they were young (or if the contact was mostly negative and intimidating). Just as you’d expect, these experiences will often lead to fears of either people or other dogs.

In addition, some small breeds of dog can naturally have a nervous personality, and this can play a role as well. Although these are usually the two main reasons, your dog could become nervous for a variety of other factors, too, depending on their past experiences.

Fear of noise is pretty common in most breeds of dog, and it’s a natural fear for most dogs to have. Noises like thunder and fireworks usually scare most dogs, although some tend to be more sensitive to these effects than others. A great way to overcome these fears is to use a pressure wrap like the Thundershirt, which can be incredibly effective for these fears (as well as soothing an anxious dog in general).

Some dogs can become scared when they see moving objects they do not recognize. For example, baby strollers, in particular, seem to scare dogs if they’re not used to seeing them very often.

Commonly, nervous dogs will have a fear of people’s hands, and it can, unfortunately, be a possible sign of a dog having suffered physical abuse when they were younger.

While there are many things that can be causing the nervousness, one of the biggest triggers you’re ever likely to see is a fear of loud noises.

These loud, unexpected noises tend to set off the nerves of most anxious dogs, so it can be a good place to start with some gentle confidence building.

When your dog hears a loud noise, the natural reaction is to find somewhere to hide. When an owner sees this behavior, their reaction is to comfort the dog and try to distract their dog from the noise. While this sounds like the logical thing to do, the problem is actually starting right here.

What most owners fail to realize is that comforting your dog in this way can exaggerate your dog’s fear in further. Your dog will presume that there’s a valid reason to be scared, otherwise you wouldn’t be comforting them, would you?

Now, let’s take a look at a few effective tactics you can use for desensitizing your dog to these fears.

First, make a sound recording of the noise that’s scaring your dog.

Next, pick a time when the noise isn’t going to occur naturally (so if thunder is a trigger, don’t do this exercise in a storm).

Then you’ll need to play the recording in your dog’s presence.

Obviously, this may unsettle your dog, so make sure you play the recording quietly at first. Reward your dog for not being nervous, but only when their demeanor is no longer showing much fear or apprehension. Give your dog some verbal praise and maybe even a food treat, too, but only when they’re not showing signs of anxiety and nervousness.

You can do this exercise several times, and continue to do it over the course of a few weeks. Aim to gradually increase the volume of the recording over time as well, but don’t make any huge leaps in volume that may scare your dog. Gradual progress is the key. Make sure to reward your dog each time once they’re showing confidence rather than fear or apprehension.

Overcoming A Fear Of “Things”

Your dog can sometimes become scared of objects and certain things in general. In many cases, moving objects will often cause the most fear when your dog isn’t used to them, and objects like baby strollers will often cause anxiety in a nervous dog.

To start with, put your dog’s favorite food treat near the object that your dog is fearful of to give some motivation to approach.

Additionally, make sure you haven’t fed your dog before doing this exercise. It’s best if they’re a little hungry, just enough to pique their interest in the treat.

If you simply keep doing this exercise over time by gradually putting the food reward closer to the object your dog is scared of, until the food reward is actually on, in, or next to the object, then you’re likely to make some progress (and it often happens faster than you think if you’re using their favorite treats!)

But to make the exercise even more effective, the next step is to put your dog’s food bowl next to the object at meal times which will help to desensitize them until the point where they have no reaction at all.

While this may unsettle your dog to begin with, it shouldn’t take too long for the desire for the food to overcome any apprehension, especially if the object isn’t moving or doing anything suspicious. 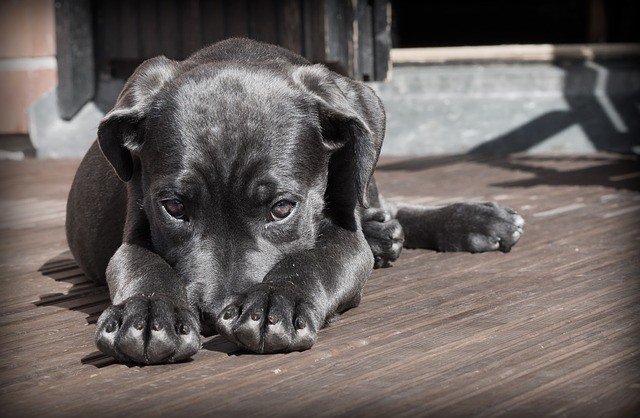 My Dog Is Scared Of Hands – What Should I Do?

Another common fear shared by nervous dogs is the fear of hands. Nervous dogs often want to greet people, but their fear of hands holds them back, which often causes a peculiar ‘back and forth’ behavior that seems strange to us humans, but once you understand what’s going on it starts to make more sense.

Begin by putting a tasty treat in the palm of your hand, then place your hand on the ground in front of your dog.

When your dog takes the food without fear, stand closer to the dog each time. Eventually, you can move to your dog’s side, and they’ll no long flinch away at all.

If your dog is very nervous, then you can expect some submissive rolling, and possibly submissive urination also, especially if they have a very strong fear of hands.

If this happens to your dog when you’re having a training session, you could be coming across as too scary to your dog, so try to make progress in more of a gradual, slow manner. Perhaps use a gentler tone, and build their confidence with more praise and playfulness, and remember to take your time and be as patient as possible.

It’s usually best to not touch your dog too much when they’re showing fear and nerves. Even though you mean well when you comfort a nervous dog, there’s always the risk of reinforcing the behavior, as well as the physical contact causing further intimidation, too.

Invest In A Thundershirt

One of the best things to try if you have a nervous or anxious dog is to use a Thundershirt, which is a pressure wrap that’s very comfortable and reassuring for your dog. In fact, you may be surprised by the positive effects it can have on nervy dogs.

Submissive urination is another common issue that can affect nervous dogs, so it’s worth learning a training tactic that can help to boost your dog’s confidence and reduce the number of accidents they have.

First of all, start by getting down to the same level as your dog, which will make your dog feel more confident as you’ll appear less intimidating.

Next, convince your dog to get up by luring them with their favorite toy or with a treat. You can start to play a game with your dog as well, but only one that involves NOT touching your dog. You could perhaps throw a favorite toy for your dog to bring back to you, for example.

You want to avoid touching a dog when they appear nervous, as it will only intimidate further. Throwing a toy for them to fetch lets your dog leave the submissive position without being physically handled by you so it’s often a good technique to use.

The anxiety-based urination can sometimes occur when you greet your dog after being out of the house for awhile. If your dog rolls over and urinates when you greet them, just try to ignore your dog until they calm down. While it may be frustrating, the truth is that any “punishment” would be far too harsh and make the problem worse rather than better, so it’s important to keep your cool in these situations.

Overall, dealing with a nervous or fearful dog often requires a softer approach, just as you would expect. Fortunately, a many of the problems you’re facing will quickly disappear once you’ve helped your dog to build some confidence, and ultimately, helping a fearful dog to increase their confidence can be very rewarding and worth the effort.