Deciding whether or not you should give your dog table scraps is something that many dog owners are likely to ponder at some time or another, and you may have come across various arguments both for and against.

But in this guide, we’re going to take a closer look at the table scraps issue in further detail, and you’ll also get a better understanding of which table scraps are okay for your pooch and which ones aren’t. So keeping this in mind, let’s get straight to it.

A Rule Of Thumb

First of all, a good rule of thumb is to avoid giving your dog table scraps on an all too frequent basis, particularly if the table scraps aren’t going to support a healthy diet for your dog.

Now, it’s interesting to note that giving a dog frequent table scraps may have been a very common occurrence many decades ago, so the modern reversal of this advice may seem a little odd to some.

But it’s important to take into account that the average human’s diet may have changed quite a bit over the years, so while it’s generally safe to supplement your dog’s diet with lean cuts of meat and vegetables, it’s not so wise to let them enjoy popular junk foods that so many of us enjoy these days! 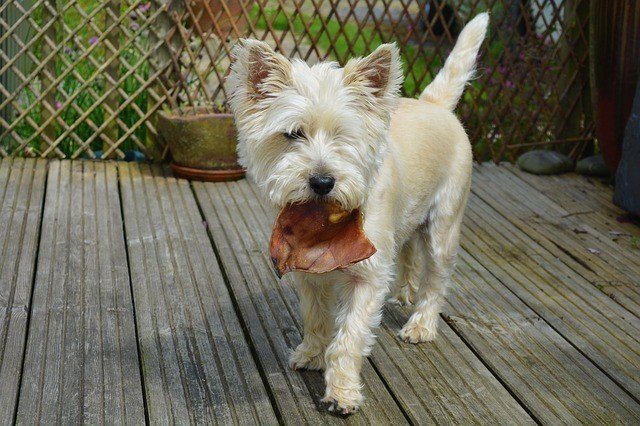 What Happens To A Dog Who Eats Table Scraps?

Furthermore, many modern foods are far too high in fat for the average dog to cope with, so if they eat them too frequently, this can lead to various health issues. For example, fatty foods can lead to increased risks of pancreatitis, and this condition is something that vets are more likely to see in dogs who indulge in fatty table scraps regularly.

There is also a range of dangerous and risky ingredients in your table scraps that are safe for humans, but far more hazardous for dogs. For example, if the scraps contain onions, nuts, raisins, corn, or cooked bones, then you’ll need to keep them away from your dog. Of course, it goes without saying that you should avoid giving your dog anything that’s high in fat, or contains any amount of chocolate or alcohol.

You also need to be wary of the higher calorie content that many table scraps can have, as frequent consumption of these foods can quickly lead to obesity for your dog. Just as you’d expect, canine obesity and excessive weight gain causes various health issues such as diabetes, liver dysfunction, reduced immune system efficacy, along with overly stressed joints and even breathing difficulty.

Finally, changing your dog’s diet too frequently can lead to stomach upsets if your dog has a sensitive digestive system, and it can even affect an entirely healthy dog as well, especially if they’re experiencing a wide range of different table scraps – particularly if they’re used to an ordinary kibble-based diet.

Which Table Scraps Are Safe For Dogs?

So now that we’ve covered the risks of poor quality table scraps, it’s worth learning more about the kind of scraps that’ll be safe for your pooch to enjoy on occasion.

In general, the safest option is lean meat and vegetables, which are often the main components of your dog’s diet anyway. However, you can also give them fish such as herring and tuna without too much concern, although you’ll need to make sure they’re not in oil due to the higher fat content this poses.

You can also give your dog cheeses, which can be further beneficial due to the protein and calcium content. But again, giving cheese too often can be bad due to the fat content again, so it’s wise to pick cheeses that are known for lower fat content.

Other safe options include chicken and chicken broth, but you’ll need to be careful with any seasoning or spices that are on the food, and any use of onions should stop you from giving it to your dog. 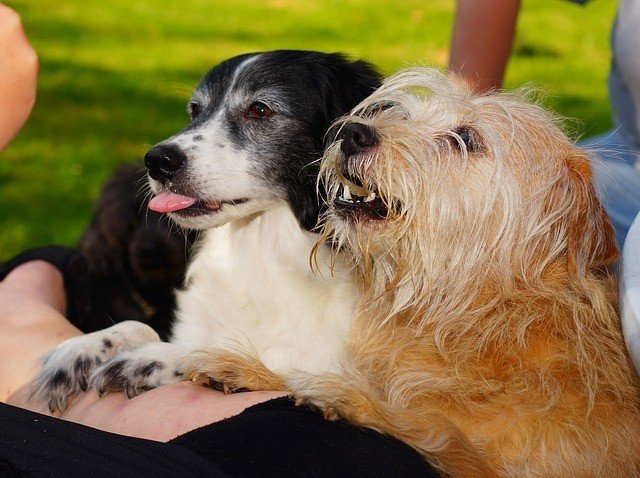 Be Wary Of Bad Habits

It’s wise to keep in mind the risks that can occur if you’re feeding your dog from the table. In fact, a common bad habit that may develop will be begging, and while it may seem cute at first, it can ultimately become a very frustrating problem in some households.

Of course, this risk can vary depending on the overall character and previous habits of your dog, but you can certainly encourage the begging behavior inadvertently by giving your dog juicy and enjoyable table scraps whenever your dog begs for them. Before too long, this can make your dinner time a nightmare.

One effective way to counter this will be to put any healthy table scraps directly into your dog’s food bowl, so they don’t hassle you at the table so frequently.

It’s Kinder To Not Give Your Dog Bad Food!

Some dog owners may struggle when it comes to sharing food with their dog, especially if your dog is giving you those big puppy dog eyes that make it hard to say no.

However, even if your dog wants the table scraps (and it can be tough to say no at times!) you’ll be doing them a bigger favor by not giving in. Instead, it’s best to have some tasty alternative treats to feed your dog instead. That way, your dog won’t feel deprived when you’re enjoying a tasty human treat that isn’t as healthy for them, as they’ll have their very own doggie treat to satisfy them!

If you’re concerned about giving your dog table scraps because the food isn’t likely to be healthy for your pooch, then you do have another option available which should keep everybody happy.

Many dog owners like to keep some separate healthy dog treats around for their dog, and you can provide these treats instead of giving them unsuitable table scraps.

Not only with this trick give your dog something healthy to enjoy, but it’ll also discourage begging at the table because you won’t be rewarding them with your leftovers!