If you’re asking yourself the question “why do dogs chase cats?”, then you’re certainly not alone.

This interesting phenomenon is something that crosses the mind of many dog owners at some point (especially if you have a dog who’s prone to chasing), and it’s worth delving into the subject in greater detail if you want to understand your dog’s behavior at a deeper level.

It’s safe to say that dogs love to chase and cats love to run away, so there’s an inherently satisfying aspect to the ‘cat chasing’ behavior for any dog who has evolved to chase small prey.

A dog’s natural predatory instincts mean they will generally love to chase animals that are smaller than them, so the behavior can be somewhat self-reinforcing and rewarding to your dog all by itself.

The prey drive is certainly another powerful force that’s an innate characteristic among certain dogs, and particularly for certain breeds.

For example, breeds that have traditionally been used for working or hunting will have strong prey drives, but any breed of dog could feel satisfaction from the act of chasing itself.

Fortunately, the behavior can be somewhat subdued through training, especially if the dog is accustomed to being around friendly house cats from a young age and has learned to accept them as a part of the household. 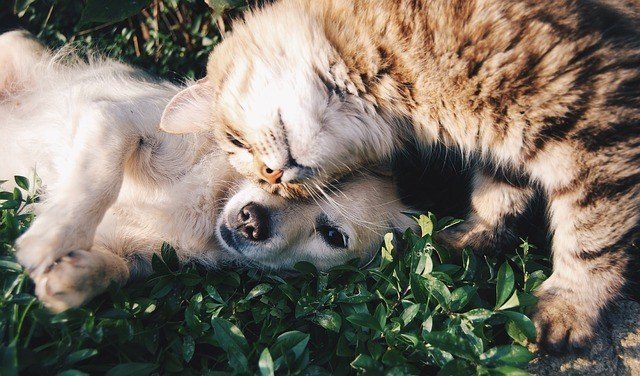 In addition to your dog’s prey drive instincts, they may also be interested in merely playing with the cats, particularly if they are a young puppy who hasn’t yet begun to chase in a ‘predatory’ sense. Of course, this can lead to some confusion from the cat’s point of view, who can often still feel quite defensive even when a dog is just trying to play!

How To Stop Your Dog Chasing Cats

We’ve written an in-depth guide on how to stop your dog chasing cats, squirrels, and other wildlife, so it’s worth checking out that guide for further tips and advice on dealing with specific chasing behaviors.

In most cases, you should be able to teach some dogs to accept some cats, although there are no guarantees with such matters, depending on the temperament of both animals.

Some owners find that introducing their dog to their cat slowly and gradually, while rewarding desirable behavior as you go, can allow you to make both animals accept each other over time. But it’s best to engage in this process over the course of several days or weeks rather than rushing into it, particularly if your dog is already quite adverse to the cat in question, or if the cat is very wary of the dog.

It’s important to watch for any signals of aggression or fear, as you don’t want to let them get so close that the cat might swipe at the dog, or your dog lunge at the cat, which would quickly tilt the interaction toward a negative outcome for both pets.

Important signs to look out for will be hissing, back arching, and swiping. If your dog has been swiped by a cat, there’s a good chance they may feel aggressive or develop a fear towards the cat, so patience will always be key if you’re introducing two different animals to each other.

When dogs and cats have been socialized together, then they may even become good friends, but the natural instinct tends to lean toward an antagonistic relationship in some cases.

Another reason to take the process slowly and gradually is due to the fact that your dog can easily become overwhelmed and ‘overstimulated’ when they are close to the cat, and at this point, their natural instinct to chase may overtake them, and they’ll be unlikely to listen to your commands.

So, the key is to gradually allow the pets to get closer without losing your dog’s focus. Over time, you should see positive results. If your dog is relatively calm and relaxed with the cat in the room, then you can work towards letting them get closer. But if one of them becomes too agitated at any point, then it’s wise to back off a little and not force them to interact too quickly!