Whether you like it or not, dogs love to lick!

The question is, why?

Is this something they naturally do or have we, as their owners, unknowingly (or knowingly) encouraged this behavior?

Why Does My Dog Lick Me?

There are many theories as to why a dog licks the people in their lives.

We know that dogs are descended from wolves and while they have changed in many ways, there are still behaviors that can be linked back to their wild ancestors.

In a wolf pack, when the adult wolves return from a hunt, any pups that are still too young to join them greet their elders by licking and poking the adult’s muzzles. Researchers have determined that this behavior causes the adult to regurgitate some of the meat they’ve eaten.

Then, the puppies feast on the regurgitated meat.

As disgusting as this may sound, it’s a way to wean pups from their mother’s milk and start them on the meat they will one day eat as adults.

It’s possible that your dog might want to lick your face because instinctually, they believe it will somehow result in an extra meal!

Yummmm… a delicious owner! No, your dog doesn’t want to eat you! They might, however, love the salt that is released on your skin, especially if you’ve been sweating. Some dogs even seem to love the taste of lotions that many people use on their skin.

You’ve Trained Them To Give Kisses

What started out as a simple behavior may have ultimately become a command whether you realize it or not! Many owners will call licking, “kissing” and will say “Oh, give kisses!” to their dog. Over time, the dog associates this as a command for behavior that their owner likes and does that they are told!

Your Dog Is Socializing

New mother dogs will lick their newborn pups, both to clean them and to learn their scent. In a wolf pack, the wolves will groom each other, further establishing their bond as a pack.

When your dog licks you, he or she is likely marking you as part of their inner circle! It’s also a way to express love for fellow packmates.

Endorphins are a type of chemical that’s produced in the brain. Endorphins serve several purposes including:

Dogs produce endorphins just like humans do and studies have shown that endorphins are produced when a dog licks! So if your dog seems to go into a calming trace when they are licking you, think of this as a form of meditation on their part. Sloppy, slimy, loving meditation!

However, if your dog’s licking behavior becomes almost obsessive, it might be time to question why they are self-soothing so much and what you can do to eliminate stressors in their life. 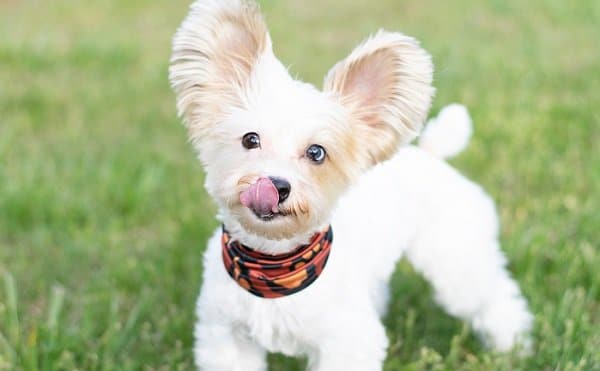 Is It Dangerous To Let My Dog Lick Me?

Generally speaking, it’s safe for both healthy children and adults to let their dogs lick their skin.

However, if you have an open wound, don’t let your dog lick the wound. Although both humans and dogs have about the same number of bacteria in their mouth (around 600 different types of bacteria) the reality is that the average human brushes their teeth much more frequently than any dog. Additionally, humans generally don’t eat things off of the ground such as soil, feces, or dead animals (we hope).

Bacteria from your dog’s mouth could enter an open wound and cause infection.

People who have weakened immune systems are particularly at risk of being infected by a bacterium called Capnocytophaga canimorsus. In very rare cases, this bacterial infection has caused the death of a human who contracted it from a dog lick. In one instance, a woman lost her hands and legs because the infection caused serious damage to the tissues in her limbs.

Many dog owners have heard that dog saliva can help heal wounds and point out that when wounded, dogs tend to lick their wounds.

There is some truth to this. The actual physical act of licking helps to remove any foreign matter from the wound and saliva does contain a chemical compound called histatins that fights fungal infections and some bacterial infections.

That being said, histatins are also found in human saliva and the saliva of other mammals so in theory, licking your own wound could be beneficial. That doesn’t mean your doctor would recommend it!

My Dog Obsessively Licks Me – What Can I Do To Stop This Behavior?

Although it’s uncommon, dogs can have obsessive compulsive disorder. Basically, this causes an exaggeration of otherwise normal behavior. The following are examples of types of behavior that is frequently exaggerated by dogs with this disorder:

This disorder is believed to be the result of stress and anxiety. The repeated behaviors help to alleviate the stress that your dog is feeling and over time, without intervention, these behaviors will only get worse.

In order to treat this obsessive behavior, dog owners need to first identify what is causing the dog such stress.

The first step is to take your dog to the veterinarian for a complete exam. Sometimes, the cause of the dog’s stress is pain or discomfort from an underlying medical condition that isn’t outwardly obvious, such as gastrointestinal distress or orthopedic pain. Additionally, neurological conditions can cause obsessive behavior.

If your dog is found to be healthy, the next step is to consult with a veterinary behaviorist. They may be able to identify small triggers that set off your dog’s obsessive licking and can also provide suggestions for medication and training that can curb this behavior.

If you’re struggling to stop your dog from participating in obsessive behavior, consider the following techniques:

1. Distract: Whenever you notice your dog begin their process, try to stop it in its tracks by distracting them with something else. This distraction should always be positive and reward-based, such as introducing a toy or giving a food reward.

2. Redirect: Once you have their attention, redirect it by engaging in something else they enjoy, such as a game of tug-o-war or a walk around the block. You might even want to begin feeding them their meals inside of a puzzle toy so that they are focused on food rather than the OCD behavior.

3. Practice Basic Commands: Whenever possible, command your dog to do an action they can’t perform without stopping their unwanted behavior.

Remember, if you reward your dog at the wrong time, you’ll reinforce the unwanted behavior.

Obsessive compulsive behavior is often seen in high energy dog breeds that aren’t given enough mental and physical stimulation. One way to help is to increase the amount of exercise the dog gets each day.

When a human or dog exercises, this stimulates the brain to produce endorphins! By increasing your dog’s exercise level, you could help them to become healthier and happier thanks to an increase in endorphins. Exercise is also a great way to redirect bad behavior.

If you’re unable to exercise your dog as much as they need due to time constraints, consider hiring a dog walker or taking your pup to doggy daycare for playtime.

Finding the right combination of training, exercise, and medication can be difficult since no two dogs are exactly alike. Patience and persistence are key to helping you handle your dog’s OCD.